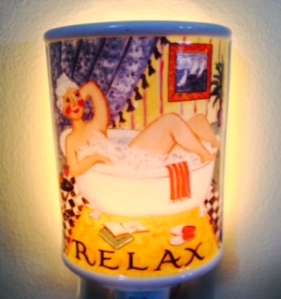 “There must be quite a few things that a hot bath won’t cure, but I don’t know many of them.”

I am addicted to baths. It began in my childhood, at what age I cannot say for certain. I can envision myself and my two sisters bobbing around in our bathtub, a simple no frills fixture unlike the whirlpool spas of today. My mother, who instilled this love of baths in us, laid peacefully center.  It was those calming waters which somehow righted every wrong and made life at the end of the day oh so much more delightful.  “Can you start the tub?” we would call to my mother nightly and upon hearing the rumble of the water racing through the faucet, would immediately feel comforted.

As I grew into older childhood my nightly baths and love of, continued.  I remember bringing into the tub different props for amusement. My fondest memory involve the Barbie dolls which I would plunge into the water, their perfect bodies and pointed toes gracefully leaping from the soap holder which I would use as a makeshift diving board.

When I left for college I realized with some dismay, that my nightly baths ritual would become a thing no more. Bathing in a dorm bathroom shared by who knows how many others was something I did not find appealing – not to mention the cleanliness factor. Yes sadly, my nightly baths ceased upon entering freshman year in college and were promptly replaced by a shower.

Yet one night, the old urge struck. Returning from a night out and perhaps one Tequila Sunrise too many, I made my way to the dorm bathroom.  Perfect! At 3AM on a weekday there was not a soul in sight. I undressed and proceeded to the sink, my towel tightly wrapped around me. As I began to brush my teeth I felt the towel slipping. As it fell to the floor I was faced with two choices: pick it up immediately or finish brushing and then retrieve the towel.  Given the late hour and the desolateness of the dorm, I opted for the latter – my fatal mistake. As if in a dream I watched the bathroom door swing open to reveal a tall sleepy male, no doubt someone’s boyfriend as my dorm was all women. His eyes, which only moments before were half slits were now golf balls as he gaped at me standing before him, stark nude, tooth-brush still in hand.  I shrieked, tore past him and jumped on my roommate’s bed. Babbling and breathless I attempted to explain to her what still rates as one of the most embarrassing moments of my life.  Oh bath, how could you have forsaken me?

When I became engaged and began staying overnight at my fiance’s apartment I learned the meaning of true love.  Craving my bath one night, I mentioned that his tub did not seem well, completely clean.  I asked where I could find his cleaning supplies. “Do you have to have a bath every night?” he asked with some annoyance as he disappeared into the kitchen. Returning with a can of Comet and scrub brush he for the next 15 minutes, painstakingly cleaned the tub for me. And with that gesture, I knew I was marrying the right man.

I have two sons who have inherited their mother and grandmother’s love of baths.  I can hear the water running nightly and I have caught them filling up the tub to play their own Barbie doll type of diving game but instead they use pencils.  They catapult the pencils off the side of the tub in their own game of acrobatics.  At any hour, morning or night, at the slightest hint of a stomach ache or joint discomfort from sports, a tub is running.  Aqua therapy of sort.  I realize this is a luxury in our society and lecture them on the number and length of time spent in the bath.  But it often falls on deaf ears as my son races in from school, drops his back pack in the corner and heads up to the bathroom to turn on the bath.  He too understands the healing of the waters.

My adult bath ritual has changed only slightly since childhood.  I still take one every single night, but instead of the Barbies I bring one guilty pleasure which I lay on the side of the tub; four Hershey Chocolate kisses.  My second favorite comfort in life.

I am an ex New Yorker who still misses the vibrancy of the city. I seek out the humor in every day life and relay it through my stories in the hope others will appreciate as well. I love to write about growing up with my fantastically unique Irish mother whose memory inspires me every day. Although she is no longer with us, her antics are an endless staple for my tales. I currently live in Connecticut with my husband, two sons and toy fox terrier Anabel. View more posts

34 thoughts on ““My Happy Place” The Marvelous, Magical, Mystical Powers of a Bath”